Despite the siren song of "so much to do!" and the influence of my introvert tendencies, I got myself out of the apartment yesterday and over to San Francisco for the Bicycle Music Festival, and I am so glad I did!

As usual when heading to Golden Gate Park, I took BART to Civic Center and then rode up Market Street to the Wiggle and took it up to the Panhandle. From there, the BMF map said, it was up JFK Drive, left on Transverse Drive, right on Overland, and hey presto there you are. First off, BMF map fail. And the whole "Golden Gate Park was designed so you can easily get lost in it, isn't that great?" thing is overrated. When standing on Overland looking at Speedway Meadow, the thought that comes to mind is "nope, you can't get there from here." I'm sure Tri Tip Trio were great, from what I could hear filtering up the hill to Overland. Unfortunately, by the time I'd backtracked down Overland to JFK and made my way to Speedway Meadow, they were done performing.

To my pleasure, I did get there in time to hear Sean Hayes. I only know a few of his songs so far, but these are two of my favorites:

Next came an extended pause while the festival got packed up onto bikes to move to the second performance stage. Onto bikes? Of course — the BMF is 100% human- and preferably pedal-powered. All the transportation and power generation (including lighting and amplification) are bike-powered. It took a while to pack up and OMIGOD was it cold. I had on my "I hella bike Oakland" t-shirt, then put on my long-sleeved merino Swobo sweater, then added the BMF t-shirt I'd bought, then my windbreaker... Kept my backpack on because it was warmer with my back covered.... damn COLD!

Eventually we got up and rolling... then paused for technical difficulties. Rolling again! Wait, a cable's come loose. Finally we did get rolling, albeit slowly. I swear, the average speed was less than 3 MPH.

This being the Bicycle Music Festival, you can't move to the next point without music. First performer up on the Live On Bike stage was Obo Martin, seen here rolling along beside the drummer (sorry it's a back view of the drummer & you can't see his face or kit): 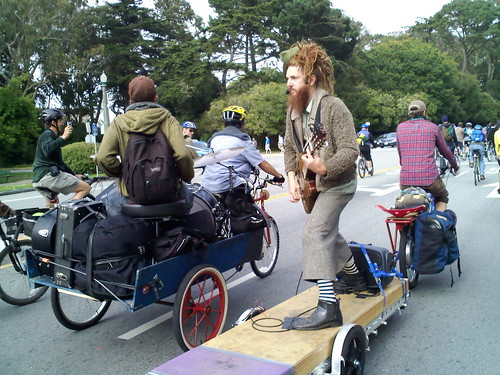 Definitely enjoyed his performance (particularly the filked version of the Ramones' "Blitzkrieg Bop" that started out "Get out of my bike lane!" and had us chanting "Hey, ho! Let's go!" with vigor) and would like to see him again. If only he would update his website — the "upcoming gigs" section now says "booking for spring 2009!"

After Obo, next on the Live On Bike stage was Justin Ancheta. Also outstanding.

We continued rolling through the city towards 16th & Wisconsin, giving headaches to the police escort the whole way, I'm sure. (Let's just say that the phrase "herding cats" came to mind. Also, how many people do you have to get chanting "Move to the right; keep the left lane clear!" before other people start paying attention? Sheesh.)

When the ride got to the second performance venue, a reclaimed-intersection mini-park in front of Axis Cafe, I peeled off to head over to REI to look for a new merino buff (no luck) and then Rainbow Grocery for various earthy-crunchy things that are hard to find in the East Bay, then headed back. As I was locking up my bike when I got back to Axis, I heard whoever was on the mic say, "Let's give it up for San Francisco summers — I fuckin' love it! I also love my gloves, and my scarf, and my coat..." I mean, it was freaking COLD all day. Wound up missing a couple of performances, but got back in time to listen to Locura while eating a mini-pizza at Axis (not bad, but $8 goes a lot farther at Lanesplitter) and drink an Anchor Steam. A couple more performers, and it was time for the act I was most looking forward to: the Getback.

Damn, did they bring it, despite various technical difficulties, like mics cutting out at times, and the problems with the weather. After the first song, Diggs asked the crowd, "So how you doin', Bike Music Festival?" The crowd's response was not quite what he was looking for, it seemed. "C'mon, y'all, it's like you're tired or cold or something. What's up with that?" *zips hoodie farther up for warmth* "C'mon now, how you doin'?" Still, it didn't take long before he'd shed his hoodie entirely (although after one song, Lauren, on the keyboard, groaned, "omigod, my hands are so cold!").

It was an excellent show. Only three of the four Getbackers were there, Rafa still being in Wisconsin, but Diggs, Lauren, and Chinaka were on top of things.

The show ended about 10:10 — I have to give the BMF huge points for staying on schedule, despite various technical difficulties and the ride over taking twice as long as it was expected to — and I was able to make it onto BART well before the last train.

Outstanding event. Fun, good music, and very inspiring. All volunteer- and community-driven — the bands were playing for tips, and they were able to persuade the city to skip the expen$ive trash collection requirement because "we've got community trash pickup and we'll leave no trace we were there when we're gone" — and I find I am a complete Live On Bike junkie. I swear, it doesn't matter who's performing, if they're doing it on a rolling stage on the back of a bike, I'll ride along with them and have a good time.

There may already be a Bicycle Music Festival in your town, and if not, I highly encourage you to consider rolling your own. SO much fun.
Collapse